Is normally the sort of phrase on would utter when construction on your layout is not proceeding as planned. Me. I favour a loud "Blast and blither!" that comes out as "Blaast and blithaah". Others will paint the room purple with more colourful language. But in this instant, I'm talking about a new development in fiddle yards or off-stage storage for exhibition layouts. That is what the fiddlestick is.
Basically a stick that plugs into the end of the layout that is long enough to support a train cassette such as a converted PECO Locolift.
The theory being that if you have a small exhibition layout that only operates one loco at a time you don't really need to waste valuable transporation and layout space with a three road fiddle yard. Just take along a few train cassettes that you just plug into the end of the layout when you need them. Simple really.
Here's a few pictures from the small layout design and construction expert from Scotland Jack Trollope from his latest mini-masterpiece the "Fiddlestick Switch job" 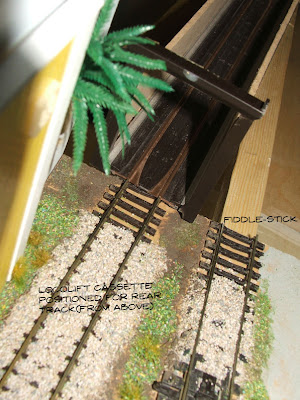 Above: The business end of the layout where the train cassettes meet the layout. 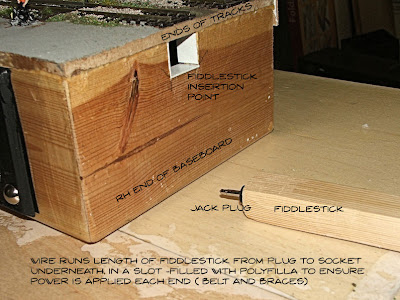 Above: the end of the layout. The stick just goes through the hole as in the picture below You'll notice a small jack plug on the end that mates with the socket underneath to make the electrical continuity 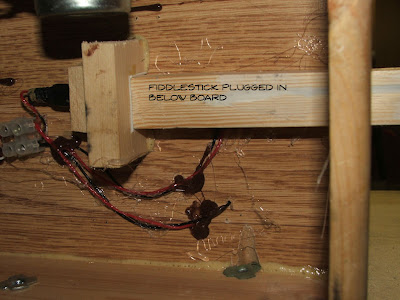