Moving with the times

It's the twenty-first century. The times, as Bob Dylan sang, they are a changin'. Railway modellers are using computer software to design their layouts and artists are using iPads to produce masterpieces. There's been a lot of talk in the English press about the great artist David Hockney and the works of art he is currently churning out on an iPad . Hockney has always intrigued me. I can't say I've always liked his stuff but he has the knack of inspiring me to look at things differently.
So, you are saying. "What the devil does this have to do with small model railway layout design?"
Well, the sketch below was produced on an iPad. 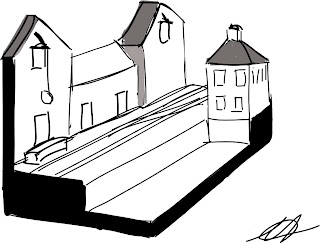 It looks a bit different to my usual sketches.
It's most definitely a layout scheme that would most probably fit in an APA box. It's heavily inspired by Purfleet Quay in Kings Lynn. A wonderful location that really screams out to be modelled with railway tracks in it. The Customs House is a stunningly beautiful building that I have harboured* dreams of modelling since I discovered it quite by accident attending the Kings Lynn model railway exhibition one year.  The layout would certainly work in 00 scale in an APA box perhaps even Scalefour. In fact I just offered my A5 turnout and P4 flex track up to an APA box and it looks like it would work. The stock would be short wheelbase diesels or steam shunters and short wheelbase four-wheeled wagons. The warehouses at the rear would have working cranes on the top floor to capture the attention of the viewers. I have made working cranes before and I know that they do get the attention of the viewer.
The sketch itself was produced using the Adobe Ideas App on my iPad 1. I've been messing with the App for a while off and on and I'm just getting to be happy with what I'm producing. So I feel ready to share my sketches with you. It's still early days yet I'll see how the technique develops.